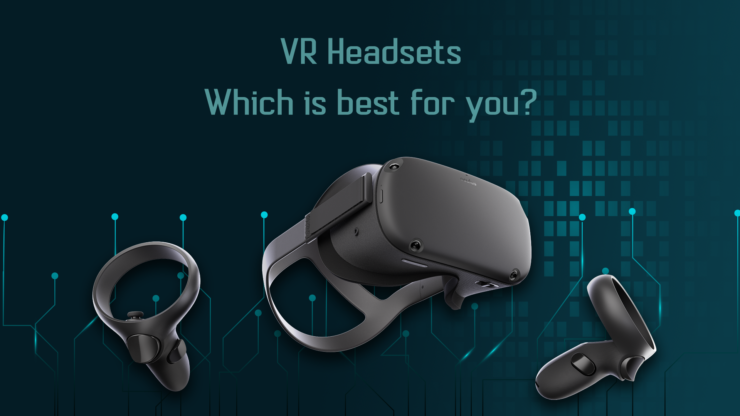 With the recent release of Valve’s long-awaited next entry in the Half-Life series, Half-Life: Alyx, the VR industry has been booming. Couple this in with the recent pandemic we’re in and loads of people are looking to buy a VR headset. Unfortunately, the VR market can be a confusing one with all the headsets. Luckily, we’re here to help you pick out the perfect one for you! The options range from the entry-level Oculus devices at 400$ all the way up to the Vive Pro Eye at 1,439€, and we’re here to cover (almost) all of them.

Before we start, here are a couple of terms to understand.

Now that we’ve covered that, let’s hop into the actual information.

If you’re just getting into VR, or do not have a powerful enough computer to run VR, this is a good place to start as it works perfectly fine without being connected to anything except the controllers. This allows for freedom that is especially appreciated in games such as Beat Saber or SUPERHOT where not getting tangled into your wires is hard to do otherwise. Another aspect that adds to the imersiveness is the fact that the screen is OLED. Additionally, it is the cheapest VR set, even without factoring in the price for a PC! The controllers that the Quest uses are the same Touch controllers as the Rift S, which are great, as long as they don’t break along the seam. In that case, however, Oculus support typically provides a free replacement.

While this VR headset is 8 hertz smoother than the Oculus Quest, it has nothing else going for it. It has a lower resolution, an LED screen, and requires a VR Ready PC. Even if you purely want to play PC VR games, getting a Quest and an Anker USB 3 USB C cable would be slightly more expensive but better than a Rift S, due to the better screen and ability to use it standalone.

The basic HTC Vive shines both in its FOV and refresh rate. If you have a PC that can push this, and the cash, the Vive is a good headset for you. However, one must ask themselves whether the approximately 150 extra euros is worth the 10/18 extra hertz and 15 extra degrees of FoV versus the Rift S and Quest. Additionally, the controllers on the Vive aren’t the most loved, however, I have no experience with them. I will not be going over the other HTC headsets as they all retail for a similar price to the Index which I believe to be better.

If you have a Playstation, this is the VR for you. It’s the cheapest VR if you’ve already got a system to run it with (PC/Playstation). It also has a praised screen due to the perceived high refresh rate. The bundles especially make PSVR a good deal as you get many games right away, unlike the other VR systems which generally do not come with any games (with the exception of Vive systems coming with Viveport).

If you’re looking for a top of the line option, look no further. The Valve Index is the undisputed king of both resolution and refresh rate in consumer-level VR headsets. Fortunately, this high quality carries on from the headset itself to the controllers, which feature per finger tracking.  These controllers are also available to purchase on their own for usage with Vive headsets (279 USD). Additionally, the headset alone (if you’ve got base stations) will net you 500 USD. The only downside to this headset is that it requires a powerful PC, but you cannot reasonably expect the performance needed to run this headset in anything less than a PC.

To conclude, we have three main VR headsets to recommend to you. If you’re looking for entry-level or standalone VR, the Oculus Quest is the best one for you. Even if you have a PC powerful enough to push PCVR, a Rift S isn’t worth it considering the meer 8 extra hertz & decrease in resolution. However, if you already have a PlayStation 4, PSVR with a bundle of games & PS Move controllers is the way to go due to the relatively cheap price. Meanwhile, if you want the absolute top of the line, the Valve Index is the best you can get as a consumer-focused product right now. If you want something in between the Quest and Index, an HTC Vive or Windows Mixed Reality headset could be a good option, however, we haven’t looked at Mixed Reality headsets here, and I would personally get a Quest over a Vive.

If you’re looking for a laptop that can handle PC VR, check out our review of the Acer Predator Triton 500.